Versioned package and dependency management is key in reproducible software and machine learning development. There are many ways to handle digital assets for this including very big and complicated cloud infrastructure. I prefer to keep things simple and as much as possible keep these assets as simple text files in a git repository and distribute them via package management. For example for machine learning keep annotation data in simple csv-files.

For .NET a simple way to do this is to simply embed these assets into an assembly, and distribute it via NuGet or similar package feeds like Azure Artefacts.

The basic approach is to have a single git repository for one or more digital assets (e.g. text files with an image file name and a corresponding set of labels or similar for machine learning), and then define a simple .NET class library which embeds these assets into it and perhaps adds some extra available properties on a type in the assembly for easy access to the assets and information regarding these.

This approach has the following benefits:

There is, however, one problem with this. If you like many machine learning practitioners are relying on “manually”-annotated data where data can be updated many times (hundreds or thousands of times). Constantly expanding ground truth data or re-annotating to make the data as clean and as full as possible. Since, the data stored in text format can get quite large (e.g. 1 GB) and you have a lots of versions the local nuget cache, e.g. C:\Users\<USERNAME>\.nuget\packages, can quickly consume 10s or 100s of GB. Not great if you are on a space limited laptop or similar. Saving disk space would be nice. The nuget package itself is just a zip-file so the size of this is not the problem as such. The cached unpacked package is. An example from a “model”/build server is shown below, where the cache is about ~75 GB.

Fortunately, this can be done in a simple way by using MSBuild to GZip each individual EmbeddedResource file. Now MSBuild already has a ZipDirectory task, but as the apt name implies this will zip an entire directory into a single file. This is less than ideal since you won’t be able to easily inspect an assembly with ildasm for example to see which assets are embedded. It also makes it a bit harder to get the individual files.

As can be seen, the files that you want to embed are defined as you would normally via EmbeddedResource. Following that a new GZip inline task is defined using the RoslynCodeTaskFactory. This defines two parameters Files and Result, which are both arrays of ITaskItem, which are in this context are simply files or rather file paths. Files is the set of files we want to zip, and Result will contain the paths of these, where .gz has been suffixed to the path. Zipped files are written to disk, but ignored by the .gitignore file, this allows inspecting the zipped files if needed.

This task is then used BeforeBuild to zip all EmbeddedResource files, and replace this set of file paths with the zipped file paths, so only the zipped files are embedded. Every time you build the project and something has changed the files will be zipped. This can take a while for large files, but since this is a project only for these assets it is rarely a problem.

When building with e.g. dotnet build this will output the following, where the list of files that have been GZipped is logged.

Doing this for the enwik8 cuts the file size from ~100 MB to ~37 MB and hence saves about 63%. However, for machine learning csv-files which contain mainly ASCII text consisting of alpha-numeric characters it is very common to see 90-97% savings.

The dll in question will contain this file and hence have about the same size.

Viewing this in ildasm you can see easily see the embedded file and it’s size. 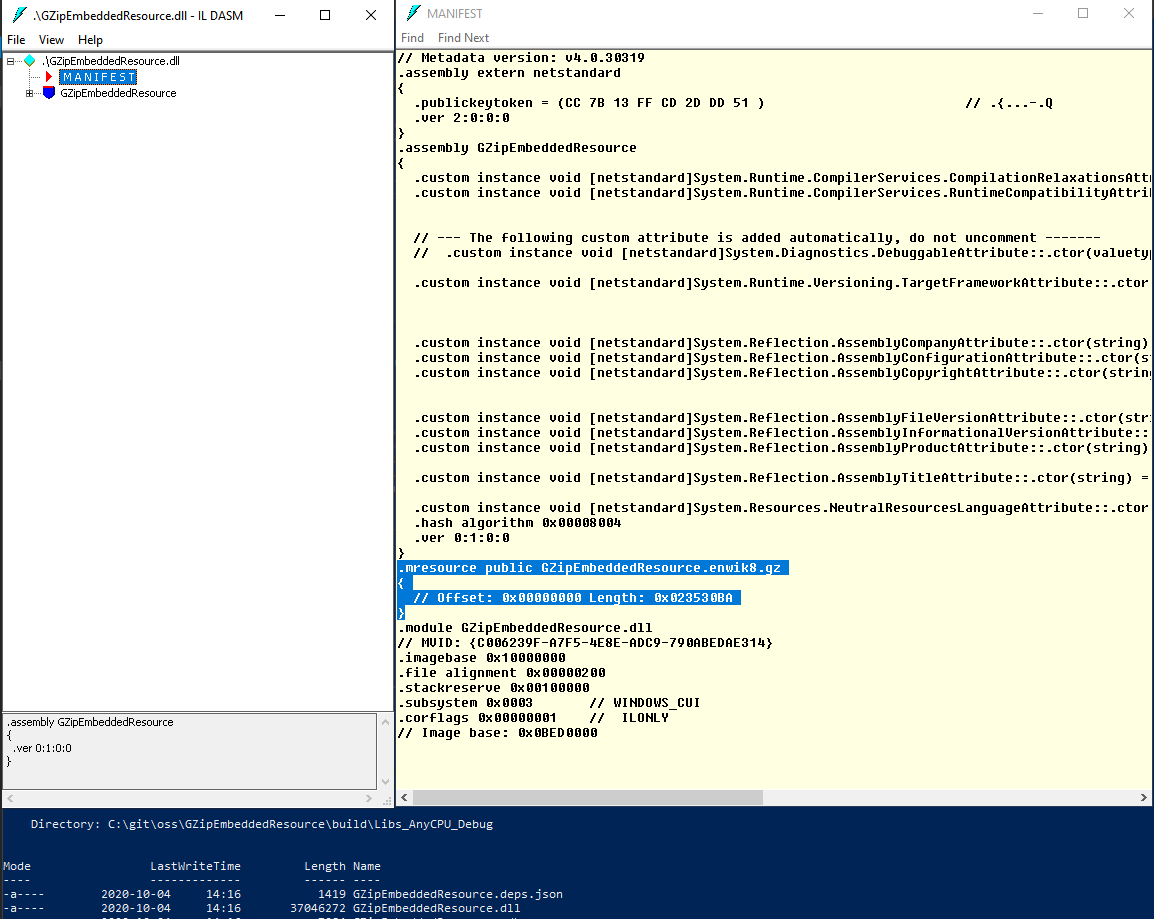 One thing to keep in mind here is that the text files being embedded will have the line endings that existed at the time of embedding so this might change based on git checkout policy and OS this is being build on.

That’s it. While you could define this task as a nuget package, keeping it as simple text in the project file allows easy customization like filtering or similar.